He is originally from Batroun, but has lived most of his life in Beirut. But it was her idea to buy that old house and turn it into one of the most beautiful hotels in the Batroun area, while preserving its authenticity.

This is the story of Dr. Bassam Tabchi and his wife, Dr. Souad Tabchi, owners of “L’Auberge de la Mer”. 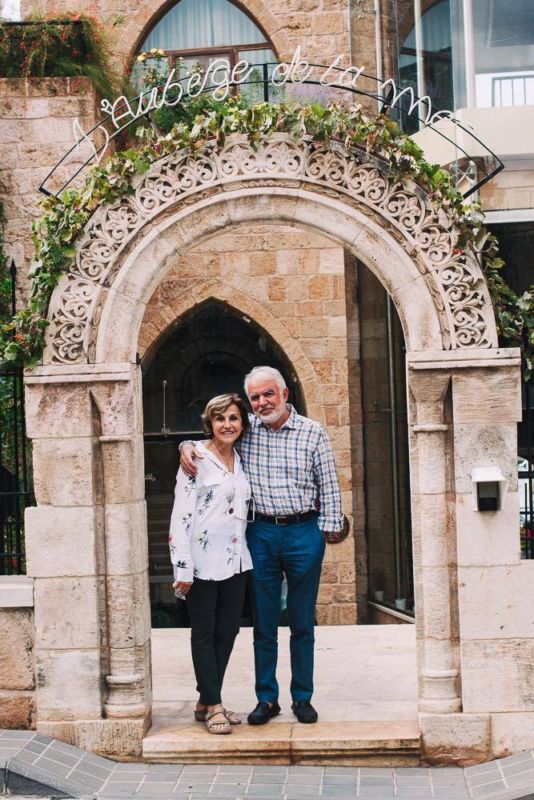 That old house is now the couple’s baby, their own object of attention, and their retirement project. They even practice their medicine all winter long to provide for the hotel once summer is here.

The house was built in 1840. It used to be the home of the priest of Saint George’s chapel nearby. Later on, it was used to stock merchandise for the port facing it.

In the 1940s, under the French mandate, French soldiers used the place while unloading their goods in both Batroun and Tripoli’s ports.

It was long before the Tabchi couple bought it, in 2005. But it did take them about nine years to inaugurate the place. A little less than two years was the delay before obtaining the permit, since the house was authentically classified by Lebanon’s Ministry of Tourism. And then another seven years to do all necessary work in order to preserve its old appearance. Modern installations were added. The renovation was done according to European standards. The floors were bought from old Aleppo houses. The attention to detail was impeccable.

Inside, the six-meter ceiling was divided by two, thus turning the place into a two-floor building.

Canadian and American ambassadors, UN employees, and once even the First Secretary of the British embassy have stayed at “L’Auberge de la Mer”.

The place is always busy during the three to four months of summer.

The couple says that mainly Lebanese visit “L’Auberge” and are hoping, with the Diaspora House next door, to welcome more people from around the globe.

They dubbed the “MyLebanon” project as very important and hoped it would contribute to bring in more Russian tourists so they can enjoy their time in Lebanon. They stressed on the importance of having tourists in winter: visitors would enjoy the ski season, the nightlife that never sleeps, and the better prices.

They also noticed an improvement of the general situation in Lebanon, for demands to the “Auberge” have increased by 30% this year, and are expecting a further improvement for next year.